Food poverty in this country is on a scale that no nation with pretensions of being civilised should tolerate.

More than 8 million people in Britain live in households that struggle to put enough food on the table, with over half regularly going a whole day without eating, according to estimates of hunger in the UK.

One in 10 adults suffered moderate levels of food insecurity in 2014, placing the UK in the bottom half of European countries on hunger measures, below Hungary, Estonia, Slovakia and Malta.

In this situation food banks are a lifeline, literally, for a large and inexorably increasing number of people. While they are a welcome emergency reaction, the reliance on them seems to have become an acceptable norm.

This time of year, typified by displays of ostentatious plenty, is particularly hard for the hungry and homeless to bear and particularly painful for the rest of us to observe. Fortunately it is somewhat matched by a big spike in direct charitabe aid.

The response of  London Muslims this year has been stupendous. Led by the East London Mosque, Muslim Aid and  together with their Christian neighbours and allies, the community has collected a jaw dropping ten tonnes of food to be donated to the charity, Crisis. Ten tonnes and still counting.

Shaykh Abdul Qayum said the drive was inspired by their faith. ”  It is a religious duty for Muslims to try to help others, irrespective of a person’s faith or background.”

Rev Ben Bradley said it was a great example of faiths working together. 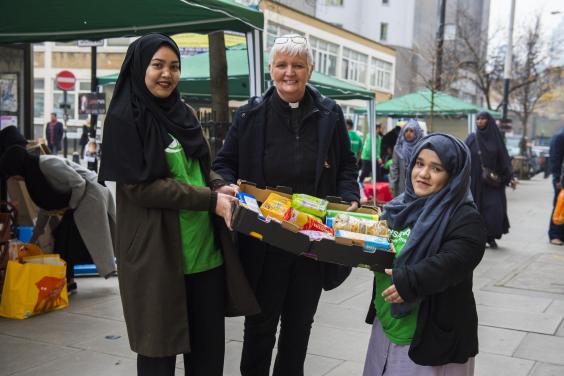 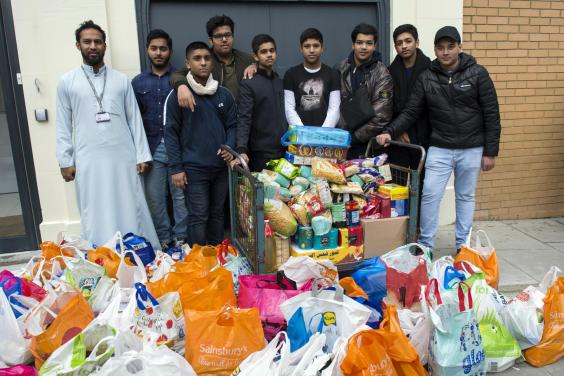 All of this is simple selflessness. No self aggrandisement, no political points

What has the Jewish community been up to all the while ?

Well it depends where you look. If you look at the community’s self appointed, self styled ” leaders”, and their nut job ” grass roots” allies,  the contrast, unfortunately, could not be starker.

They  looked at the the hunger all around them and thought ” there must be something in this for Israel.” It was but a short step from here to ISRACTION DAY !!!!!!!!!

Israction day is not just the worst pun in the history of the world, it is now, apparently, the Jewish way of giving.

The idea was dreamed up by Simon Cobbs. Then it was enthusiastically  taken up by other  grass rooters and then formally adopted by the  ” leadership” establishment.

The idea is that it would be a wonderful piece of Hasbara if Israel fed a few desperados for a couple of days. It works like this. You buy up Israeli foodstuffs, mostly in Manchester, but a few little bits elsewhere. You put together what  you have managed to buy, add in what Simon Cobbs and Anthony Dennison have managed to shop lift, and you give it to some food bank or other. The point being that the hungry  would come to see that if it wasn’t for Israel and its fans they wouldn’t be eating. Also, following an intense orgy of self promotion, the rest of us would come to see this too.

I immediately spotted a structural weakness in this idea but to my amazement the grass rooters were one step ahead of me on this point. The problem was that hunting down Israeli stuff in supermarkets would be hard work and many grass rooters would not be up to the job. A lot of people could starve to death while earnest young Zionists  scurried around  desperately trying to find some Israeli camomile tea.This was deftly dealt with by expanding the options to kosher food, So not only do the hungry not get to eat until they have taken on board the political point, they don’t get to eat without going along with Jewish religious  observances. Pass the sick bag Alice.

All of this prompted one horrified  observer to ask….

“ Is this now the Jewish way of giving ?”

SFI consists of a couple of Jews, a fake Jew, and a  few Christian Zionists with glazed over eyes. Its mouthpieces are Simon Cobbs and Fiona Sharpe. Simon is a pretend Jew and a notorious fraudster, who has had the pleasure of being the guest of her Majesty in  Exeter Slammer, in consequence of the said frauds. Fiona’s  main claim to fame is for bearing false witness and perjuring herself in a court case involving a pro Palestinian demonstrator.

You can read all about SFI here.

NWFOI are a much more substantial organisation, but scarcely  more edifying. They are mostly famous for their close association with the Muslim hating/baiting English Defence League. They usually are spoken for by their Chair, Anthony Dennison, another fraudster and struck off solicitor.

You can read all about NWFOI

Not everyone in the Jewish Community is enamoured with this Jewish way of giving of course. Gabriel Webber says………

“But what makes IsrACTIONday a disaster is this: it treats the poor as pawns. The project organisers are using the poor, placing them in intolerable political positions that have nothing to do with them and taking away their dignity and independence, all for their own political ends.

In Hebrew, the word for ‘poor’ and the word for ‘oppressed’ are the same. Maimonides made it a task of all righteous Jews to work towards ending this link. Those supporting IsrACTIONday are cementing it.

If they cared even a little about the poor, rather than about their own machinations with BDS, they would not be forcing food banks to expend time and social capital on dealing with this controversy. They would not be using the controversy to score points, and they would not be disingenuously accusing their Jewish critics – including me, no doubt – of being both anti-Israel and anti-charity. The organisers are the anti-charity ones, for faux charity is no charity at all.”

Richard Mather is the editor of the Jewism Media Agency. He says ….

” I am a passionate Zionist but the reason I took exception to this campaign is because it is quite obviously a publicity stunt –  a cynical gesture designed to raise the profile of certain grassroots Israel advocacy groups.

If the Jewish community wants to help the homeless, then it should do so without fuss. Homelessness and food poverty are serious issues. But Sussex Friends of Israel and Northwest Friends of Israel have hijacked these problems for their own self-promoting ends.

And that’s the reason why the I didn’t cover the story.”

NWFOI tried to bully the Zionist human rights lawyer Adam Wagner into supporting  Israction day but were brushed off with, “ I couldn’t support anything that is to do with an organisation as reactionary as yours.”

The main Jewish organisations, the self styled, self appointed leaders, what we might call the Jewish hard right, are all for the wheeze of course. As are the twin pillars of the Jewish gutter Press, the Jewish Chronicle and Jewish News. In fact the Board of Deputies and their much more powerful rivals, the Jewish Leadership Counci, both heavily fund SFI and NWFOI. The glitterati of these orgs and similar are falling over  themselves to make video cameos supporting the abomination.

Interestingly, your favourite socialist and mine, Jeremy Newmark, chair of the Jewish Labour Movement and erstwhile CEO of the JLC, confesses to having organised the funding  of Israction day itself.

The sheer sickness of it all is easily illustrated. Faced with two products. An Israeli one and another almost identical and at least as nutritious but half the price, they would buy or shoplift the Israeli one. Despite this being only half as efficient in an opportunity cost sense in feeding the hungry.

2 thoughts on “The Jewish way of giving ?”

An offer to my Zionist friends that want to talk about antisemitism. I won't mention Israel if you don't. Deal ?